Those of you on facebook saw this survey a few weeks ago.  I’m posting it here for everyone else to check out.

It has taken me a while to go through all the responses.  Honestly, I figured I’d get maybe twenty or thirty responses but I received over two hundred.  I’ve gone through the data and some responses were expected while others were surprising.  Here’s the brief:

The Village Services graph showed that the residents are generally satisfied with their services.  In this graph, 1 is “unsatisfied,” 2 is “somewhat satisfied,” and 3 is “satisfied.” 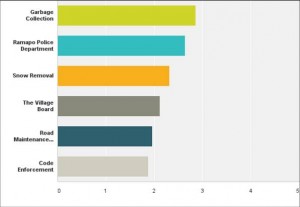 The only service falling short of the “somewhat satisfied” range is our Code Enforcement.  There was also a space to comment on each service.  While I can’t post all the responses, here were the general complaints.  Keep in mind that the compliments greatly outweighed the complaints.

Garbage.  Some complaints about cans left at the bottom of the driveway.  More than a few residents mentioned that they would rather once a week and/or curbside pickup in exchange for lower taxes.

Police.  Most complaints were about speeding.  Since this is the first survey I’ve done I do not have a baseline but I hope the speeding has improved.  The Mayor speaks to Chief Brower on a weekly basis sometimes to raise the department’s awareness of this problem.  Others mentioned the cost as an issue.

Snow Removal.  About half of the complaints were about poorly plowed cul-de-sacs.  The other half about damaged mailboxes/berms.

The Village Board.  The biggest complaint was about the fighting/bickering amongst the board members.  I don’t want get sidetracked with pointing fingers.  Based on your comments you already know.

Road Maintenance. There were mainly complaints about the state of our roads.  I think the path we are on will turn out to be a great one if continued.  As it stands, all roads should be repaved every 20 years and the path we are set on will accomplish just that.  Also, please note that Airmont Rd., Cherry Lane, and Route 59 are not maintained by the Village.  What I found surprising was the complaints about pothole repair response time.  I will bring that up with our contractor.

The Village issues graph had a surprising result.  Comments to follow, but just so you understand this graph, it is ranked in order of importance with the top ranking the most important and the bottom ranking least important.

It turns out that almost 49% of residents surveyed place preservation of the character of their neighborhood as the number 1 issue.  Taxes followed with only 37% of residents holding that issue as most important.  Surprisingly, road maintenance beat out code enforcement which I think is odd because preservation of the character of our neighborhoods is held in such high regard.

As far as issues not mentioned, open space was mentioned most.  On the heels of preserving the character of the neighborhood would be preserving open space.  There would be a few ways to do this but the most common would be for the Village to purchase land.  In order to do that we would need money which would raise taxes.  I would love for whomever suggested open space as an issue to join the Open Space Committee and put together some ideas.

These responses were extremely polar.  Some said the best thing we’ve done was keep taxes lower, almost the same amount said the worst thing we’ve done was raise taxes.  On the “best” side,  responses applauded our efforts on communication.  They also were happy that we outsourced our road and snow services as they were not satisfied with the Town.  Finally, a few people mentioned how happy they were with the purchase of Village Hall.  On the “worst” side, the number one complaint was all the fighting amongst a few Board members.  There were a lot of complaints about what the Planning and Zoning Boards are allowing and also that the Board didn’t change police departments.

I grouped these two together because the comments were very similar.  The vast majority of comments were about the neighborhoods and how they are changing.  A lot of people are worried that the Village is allowing too much change without any safeguards.  Equally complained about were the Board members themselves.  Too much bickering, jabbing, playing “gotchya”, and fighting were amongst the descriptions.  There were a few complaints about parked cars, speeding, and traffic.  One person complained that we are not attracting any young families to this area which gave me an idea I will discus later.  Although most of the comments were negative, you have to take into account that I had over two hundred responses to the survey and these two sections had about only ninety comments each.   There were some very helpful comments.  One suggestion was to start an Airmont “wants and needs” page on facebook.  This way businesses might know what the people of Airmont are looking for and can open accordingly.  Someone said each Board member should drive five miles of the Village each month and take note of the issues.

I sent out this survey to find out what Airmont residents really cared about.  I was expecting a couple of dozen or so responses and am overwhelmed with the actual response.  Not only were there over two hundred responses but there were over six hundred comments to go through.  I know it took a while but I wanted to be thorough.

Regarding the Village issues, it has been no secret that we need more code enforcement.  For the 2014 budget last year I explained in my facebook posts about putting enough money in the contingency fund to pay for a part time code enforcer.  I did some research and it turns out that hiring a code enforcement officer is one thing but processing all of their paperwork and managing their court time on top of an already stressed Village staff is another issue that has to be resolved.    I am going to craft a resolution that can solve this problem.  Furthermore, I am going to draft an amendment to our current law to address the parking issues.

I was surprised to see that taxes took a second seat to neighborhood preservation.  I guess when you hear the same thing over and over about high taxes you assume that is the primary concern.  I’m happy that is not the case as residents realize it is the quality of service versus the taxes that truly count.  I realize that taxes well spent are more important than simply slashing taxes and, as a usual consequence, services.  Ultimately it is efficiency that matters.  I can tell from the results that the majority of services are at least somewhat satisfactory which, although there is room for improvement, shows we are on the right track.

I’d like to point out that improvement on all these issues boils down to communication.  I’d like to thank you for all the personal compliments on this topic.  The only way we can improve the Village is by communicating with each other.  I’d like to applaud the many of you that positively suggested a solution when it was so much easier to simply criticize.  I encourage those with positive suggestions to join our Committees and let your ideas be heard.  Two notable suggestions were a facebook “wants and needs” group and a criticism that younger families are not attracted to this area.  I have already acted on the first one as I set up a group on facebook called Airmont Community.  I will be sending all my facebook friends invites shortly.  After that you can invite whomever you like.  As far as the second criticism is concerned, I was thinking we should put some money aside for an Airmont public relations account.  Something along the lines of an “I love New York” campaign.  We could market our Village to more urban yuppie markets like Hoboken, etc.  Just a thought.

Finally, the majority of the people reading this know that I would like to be your next Mayor.  Those of you who read my article know that my platform represents the most important resident issues: preservation of the neighborhoods, tax efficiency, and communication with the residents.  These are issues I’ve held in the highest regard and  have diligently worked to improve.  You, the residents, are the beneficiaries of that hard work.

There are no upcoming events at this time.